An Historic Estate In The 21st Century

Bingerden is situated in the province of Gelderland in the Netherlands. Although it is one of the country's oldest estates, owned by the same family since 1660, Bingerden enters the 21st century adapting itself successfully to modern times whilst preserving its cultural background. It is famous for its 18th century landscaped park and gardens and its original potager. We invite you to explore our website to learn more about Bingerden.

In the eastern part of the Netherlands, in the rural province of Gelderland, lies one of the country's oldest estates: Bingerden. The house was first mentioned in 970. At that time it was a fortified farm, protected by a moat against attacks from the direction of the nearby river IJssel. The name 'Bingerden' is probably derived from the Dutch "binnen de gaarden" - inside the gardens.

In 1660 an ancestor of the present owner bought the estate. By then the house had been enlarged, woods had been planted and a formal garden had been laid out to the left of the house. This garden, although very different today, still exists. Its original name, Het Stijve Tuintje, which could be literally translated as 'The Stiff Garden' but which really means 'The Formal Garden', has been kept.

In 1791 the German landscape architect J.P. Posth (1763-1831) was asked to convert the park and gardens to a so-called 'English landscape park'. The classical moat was changed so that it now meanders through the landscape. The soil that had been dug out was used to make undulations in the flat Dutch landscape. After more then 200 years, Posth's work is still very apparent, a small miracle in densely populated Holland.

In April 1945, the retreating German army burnt down the house. Miraculously, the topiary hedges were saved. In 1958, the house was rebuilt in a smaller version. 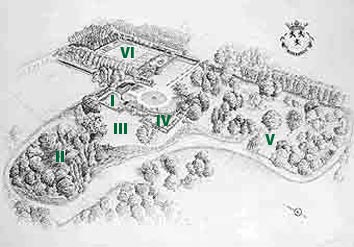 Bingerden consists of five separate gardens, together covering about 22 acres (9 hectares). They are surrounded by a moat, dug in 1791. Two gardens, each enclosed by huge yew hedges, lie on either side of the house. Inside the 'Formal Garden', large topiary structures, - referred to as 'The Monks', stand watch. From here the eye is drawn beyond the water, where cows graze in an unspoilt Dutch landscape reminiscent of a painting by Ruysdael. The buildings, gardens and park are listed. Since 1980, the owners have injected new life into the gardens.

I. The Children's Garden

Before it was restored in 1994, nothing was left of the garden opposite the 'Formal Garden', apart from some yew hedges and old, barely-recognizable box-hedge animal-figures. A new garden, called the 'Children's Garden', was laid out as a place for the owners' grandchildren to play. More box was planted so that new animals could be sculpted; the old ones were brought back into shape. Two large borders were created in warm colours full of fun for small children. These 'Happy Borders' are spectacular when they are lit up by the setting sun. Between them, a small summerhouse was built, covered in copper beech , echoing the two large groups of copper beech trees on the lawn behind the house. In the middle of this garden there is a herb garden.

As you leave the Children's Garden you can enjoy the broad view over the surrounding landscape, laid out in 1791 by J.P. Posth.

Rose borders have been planted against the back of the house, matching the colour of the old handmade bricks

The 'Formal Garden', referred to as the 'Stiff Garden' by the owners, originated in the 17th century. It is enclosed by magnificent topiary yew hedges more then 120 years old. In 1980 a large mixed border in soft pastel colours (4m x 30m) was planted against the semi circular wall. Particular care was taken to attract birds, bees, and butterflies. There is a background of shrubs to give height, structure and winter interest. Original plant combinations make this border something special.

In this large open area, the old trees have had space to grow into magnificent specimens. Wild flowers and herbs are encouraged to multiply, making the park particularly delightful in spring.

The old kitchen garden at Bingerden was originally 1 hectare (2.5 acres) in area but has now been reduced to a more manageable 3000 m².garden. It is divided into four parts, with a pergola through the middle and part of the old orchard at the back. Today the kitchen garden has become an 'Ornamental Potager', an exciting mixture of vegetables and ornamental annuals, which is different every year. All plants are sown in early spring in two greenhouses and hundreds of them are bedded out after the 15th of May. For the vegetables, a strict four-year rotation plan is followed and everything is grown organically. Each season, family and friends of the owners enjoy the produce of the Potager.

To book, contact us by letter, telephone or e-mail (for our address, see the Information section).